The Occupation of Baker’s Flat: A Study of Irishness and Power in a South Australian Community 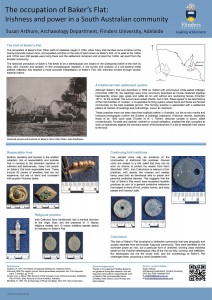 This research, undertaken for a Master of Archaeology
thesis at Flinders University, focuses on ‘Irishness’
and how it may be marked in the material evidence of
a forgotten community. The study area is a nineteenth
century emigrant Irish community based at Baker’s Flat,
Kapunda, in the mid-north of South Australia. From the
1850s to the early twentieth century, it operated as a
self-contained settlement that was recognisably Irish
and working class. The research focuses on how this
Irish community expressed identity through material
culture, and what this tells us about power relations
between Baker’s Flat and the broader community. An
existing collection of 1100 metal artefacts, as well as
archaeological data resulting from a site survey in
February 2013, are being analysed to determine the
relationships of power, class, and ‘Irishness’. In the
context of this research, symbols are seen as cultural
signifiers, and as a way of expressing affiliation with
‘Irishness’ or class. The survey results and artefacts are
being studied for evidence of overt or subtle symbolism.
Examining the material remains associated with the
entire community aims to assist in understanding
the broad connections and networks operating at a
community level, and those that operated between this
community and other communities.

Arthure, S. 2014 The Occupation of Baker’s Flat: A Study of Irishness and Power in a South Australian Community. Poster Presented at AAA/ASHA Annual Conference, 1-3 December, Cairns.