Review of ‘First Footprints: The Epic Story of the First Australians’ by Soctt Cane 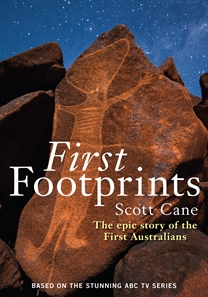 Securing a Platform for Imagining the Past

In July 2001 my family and I were camped with a large group of Manyjilyjarra, Warnman and Kartujarra estate owners at Winikurujunu, just off the Talawana Track in the heart of the Western Desert Martu homelands. It was at the end of a month-long journey with Martu across their Country. We were all spent—of fuel, of strength, of stores, of time. Unusually persistent winter rains were now confounding my sense of the desert, as well as our attempts to make it back to Parnngurr outstation, just 45 km to the west. And yet I recall a real sense of security; I remember thinking how odd it was that we all seemed so content. The days at Winikurujunu unfolded in a quiet rhythm of hunting (goanna and bustard), burning (large patches spinifex grassland), gathering (pencil yams), building (snug of acacia huts), sitting (very close in Martu style), sleeping (in our snug huts) and, most of all, sharing.

The clouds cleared, and two nights before we broke camp, Jakayu shared her story. Winikurujunu lies at the intersection of two vast Jukurrpa (Dreaming) ancestral tracks, Minyipurru (the Seven Sisters) and Wati Kujarra (the Two Men), and there in 1963, behind the very dune where we camped, Jakayu first encountered Kartiya (Europeans). She hid at the base of the dune as her ten-year-old son squared off with the enormous yellow Gunbarrel Road tractor, driven by Len Beadell on his quixotic 450 km push from Windy Corner to Balfour Downs Station. We all sat close around the fire as Jakayu whispered the account, her daughter-in-law quietly translating the details. The details, framed by the Jukurrpa, are at once zany, heroic, frightening and beautiful. The atmosphere had a profound effect on me. The security in spite of exhaustion, in the rhythm of a story told delicately at the base of a dune at Winikurujunu, suddenly shifted my perception of all that I had read about Australian prehistory. In hindsight I think Jakayu and Winikurujunu provided a wholly distinct platform for me to imagine a past that I simply had no access to before.

For the careful and open reader of First Footprints: The Epic Story of the First Australians, Scott Cane is able to do something similar. His audience should include anyone interested in engaging with prehistory from a distinct yet secure platform situated in an atmosphere that can radically alter the way we imagine a past. Cane’s ability to establish a firm empirical stage from which we can (indirectly, of course) engage with the past is remarkable; maybe more remarkable is his skill in creating an atmosphere for fresh imaginings. Both hinge on the wealth of his experience with contemporary Aboriginal Australians and his expansive grasp of the static traces (the footprints) that more than 2000 ancestral generations left behind. First Footprints is a fantastic yet surprisingly secure journey.

Cane’s platform is the country of Australia—not the nation state, but the whole of the material we stand on, stumble through, scratch at, live in and record. As Binford (1983) pointed out, the archaeological part of that country (again, the footprints) are static relative to the dynamics that generated patterns in their form and distribution. Describing those patterns—situating them relative to what comes before and after—requires a lot of careful scholarship, and on the whole Cane does a great job of it, especially for a lay audience.

Cane’s atmosphere is created through his experience in the dynamic social and ecological context of contemporary and ethnohistoric Aboriginal Australia. He can draw on a lifetime of participating with people as they make their footprints; he is concerned with those interconnections among and between people, resources, and land, and the traces those interconnections leave behind. How can we imagine what it was like for the first voyagers to make landfall in Australia? That imagining can only come from our experience in the present or, in this case, by proxy through Cane’s experience in the present. First Footprints thus weaves together direct involvement in a dynamic present with the static remains of the past to provide a cohesive social history of Australia. It is a history written in stone, bone, wood and land, and reading it requires help from an interpreter that can decipher at least snippets of code left behind; or even better, someone to help in providing us different perspectives on interpreting the past as it is constructed and reconstructed in the present.

What Cane provides is a tremendously engaging interpretation: a way to tell a cohesive and understandable story of the records of a country whose foundations are set firmly in the first wave of ‘us’—the direct ancestors of all modern humans—as we spread from Africa to populate the planet. Our spread through Asia and Europe was not into virgin territory; populations of ‘others’, members of our genus but not ‘us’, had been present in the Old Worlds since the early parts of the Pleistocene, well over a million years in east and southeast Asia (Klein 2009). Australia was something different. It was the first virgin continent that modern humans settled and, as Cane illustrates, it was an astounding event.

The timing of that event and what led up to it, however, are not (at least not yet) as clearly defined as Cane portrays them. Cane opens First Footprints with an occurrence that most assuredly rocked the world. Around 74,000 years ago Mount Toba in Sumatra exploded in the largest volcanic eruption the world has experienced in the past two million years. The picture that Cane paints is one of modern humans dispersing from Africa and reaching southern Asia sometime prior to the Mount Toba super-eruption. He goes on to speculate that Mount Toba’s devastation may have spurred the remarkable first voyage(s) out of Southeast Asia across Wallace’s line, a line that for 65 million years kept almost all terrestrially

bound placental mammals (including those ‘other’ humans) out of Australia. The problem with the Toba dispersal picture is that it conflicts with the evidence from Africa and Asia, both archaeological and genetic. The bulk of the available evidence supports colonisation by modern humans of south and southeast Asia beginning ~55,000 years ago, with signatures of populations carrying distinctively modern technologies and specific genetic lineages from eastern Africa (Mellars 2006; Mellars et al. 2013). As of yet there is no clear evidence that modern humans dispersed into southeast Asia prior to the now well-documented process of Eurasian colonisation beginning out of Africa ~60,000 years ago (Mellars et al. 2013). Mount Toba rocked the world, but probably not the world of the ancestors who left southeast Asia for Australia.

This should raise questions about Cane’s proposed 60,000 year date for the initial colonisation of Australia. Not that it is impossible, but as of yet there is no clear evidence of modern humans in southeast Asia that early, and there is no consensus about possible evidence of people in Australia before 50,000 years ago. Throughout the book Cane is generally quite careful in his treatment of scant data; I wish that in Chapter 2 he had more clearly cautioned the reader about the evidence that might suggest an Australian landfall 60,000 years ago.

An initial settlement of Australia sometime ~50,000 years ago finds broad and growing archaeological support (Hiscock 2008, 2013). But how close to that date, either before or after, remains highly contentious (e.g. Allen and O’Connell 2003; O’Connell and Allen 2004, 2007, 2012). This is not, as Cane suggests (pp.65–71), simply a matter of the limitations associated with radiometric dating techniques. Cane bases a possible 60,000 years ago landfall mostly on archaeological remains suggested to be in association with luminescence dates from four well known sites: Lake Mungo, Devils Lair, Nauwalabila, and Madjedbebe (Malakunanja II). It is important to keep in mind that at Australian sites where critical problems in luminescence dating have been addressed (see Wintle 2013), none have produced dates of initial occupation that are clearly older than 50,000 years ago. Putting aside the technical issues of luminescence dating, each of the pre-50,000 year sites Cane refers to is suspected to contain evidence of post-depositional disturbance that calls into question the relationship between what is being dated (the sediments) and the artefacts suggested to be associated with those dates (see Allen and O’Connell 2003; O’Connell and Allen 2004). Here it would have been useful for Cane to remind the reader that we should err on the side of caution when dealing with fragmentary evidence from very few sites where it is not (contrary to what he suggests on p.66) generally possible to date the artefactual material directly.

Nevertheless, none of the concerns about whether Aboriginal ancestors first colonised Australia closer to 50,000 or 60,000 years ago should detract from the extraordinary achievement that this event represents. In journeying to Australia, humans had, for the first time, broken their terrestrial chains in a big way. Cane does a terrific job of contextualising the voyage(s) implied when Wallace’s Line was breeched, and then uses similar devices (big events) throughout the book to explore the anthropogenic diversity that cascades across the continent. Chapter 3, ‘The Great Drought’, thus weaves together the archaeological evidence of changes in settlement, resource use, social organisation and social representation with ways for the reader to imagine what it may have been like to live in late Pleistocene Australia. Cane does so with detailed attention to each region, focusing in particular on the extreme environments that people modified and flourished in during the last glacial maximum.

Chapter 4 (‘The Great Flood’) continues the theme, as the continent of Sahul is fractured when sea levels rose and stabilised during the late Pleistocene-Holocene transition. The emergent countries, with economies as diverse as eel farming in Victoria and firestick farming in Western Australia, attest to the dramatic social elaboration associated with a marked rise in Holocene populations (Williams 2013). Such diversity illustrates one of the things I most appreciate about First Footprints: the way in which Cane is able to dispel any notion of Australia as a backwater in the saga of human experience. Through ‘The Great Drought’ to ‘The Great Flood’, Cane adeptly animates:

… [A] viable people in varied environments linked through shared traditions and common ideology, who survived in extreme environments through testing times. There is artistic achievement and social development through deep history enriched with notable creativity, technical innovation and diversified subsistence. These were people who changed the environment they lived in and left their mark accordingly. They were great and successful colonisers who adapted to the deserts, mountains, plains and coasts with erudite diversification (p.186).

The archaeological platform from which Cane describes the events leading up to and following the First Footprints in Australia is not completely fastened; it sways a bit in the variable winds of scholarship. But it is secure and distinct enough to feel safe as Cane leads us through sometimes radically different perceptions of the past. I suspect that Cane’s perceptions would resonate well with many of the heroic ancestors whose footprints wind their way through Australia.

Allen, J. and J.F. O’Connell 2003 The long and the short of it: Archaeological approaches to determining when humans first colonised Australia and New Guinea. Australian Archaeology 57:5–19.

O’Connell, J.F. and J. Allen 2012 The restaurant at the end of the universe: Modelling the colonisation of Sahul. Australian Archaeology 74:5–17.

Bird, D.
Review of 'First Footprints: The Epic Story of the First Australians' by Scott Cane
June 2015
80
S142-S144
Book Reviews
Download
You must be a member to download the attachment ( Login / Sign up )